Very personal story described by film festival Jury as: “An extraordinary romance: Polish alpinists Eliza Kubarska and David Kaszlikowski, take a journey inside the fjords of southern Greenland to reach and climb the world’s highest sea cliff.  To get there, they need to cross eerie, storm-ridden sea in kayaks, where capsizing in freezing waters would mean almost-certain death. Then, there is huge 1500m tall cliff…

Eliza Kubarska filmed the expedition to capture not just the feats of mountaineering, but also her own beautiful (and complicated) romance. This original climbing film reveals new motivation to conquer the unclimbed: a kiss at the top.” 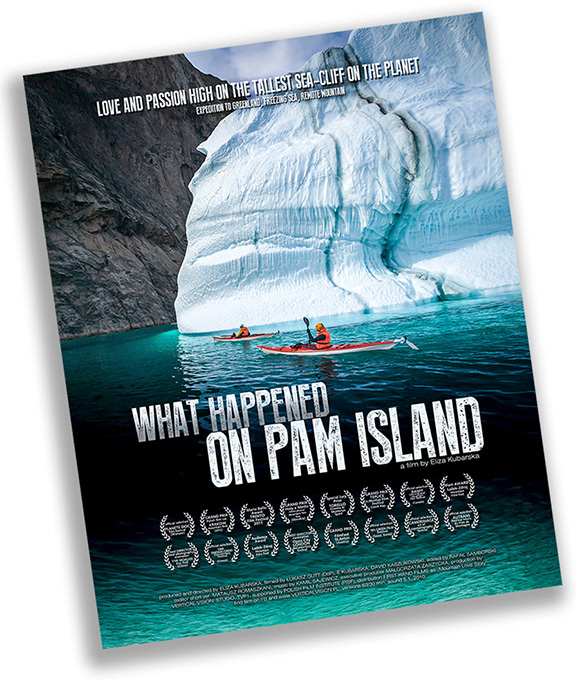 Director E.Kubarska used climbing expedition as a background  to tell original love story.  It was filmed on 2 separate expeditions to Greenland. First 2-person adventure  (2007) – when actual story happened – was filmed during real-life action. Viewer has a chance to witness emotional scenes of real emotional breakdown, watch storm or follow protagonists in their primitve campsite.  Second expedition (2009) – with cameraman and DoP, Łukasz Gutt – was organized to portray addtional  climbing scenes and kayaking, impossible to film during first trip.

As a result those scenes were filmed in multiple locations, in the fjords near-by but not necessarily on the original(2007) big wall climbing route. However, scenes contain real rock  climbing (first ascents by protagonists as part of addtional exploration), including views from the actual huge cliff (e.g team “bivy” on narrow ledge ca.700m above the sea).

You can watch film (in Poland, with English subtitles) here: https://vimeo.com/ondemand/pamisland

Manage Cookie Consent
To provide the best experiences, we use technologies like cookies to store and/or access device information. Consenting to these technologies will allow us to process data such as browsing behavior or unique IDs on this site. Not consenting or withdrawing consent, may adversely affect certain features and functions.
Manage options Manage services Manage vendors Read more about these purposes
View preferences
{title} {title} {title}