Reminiscent of the classic documentaries of Robert Flaherty, Walking Under Water is an exquisite and lyrical experience. The grand beauty and awe of cinema. 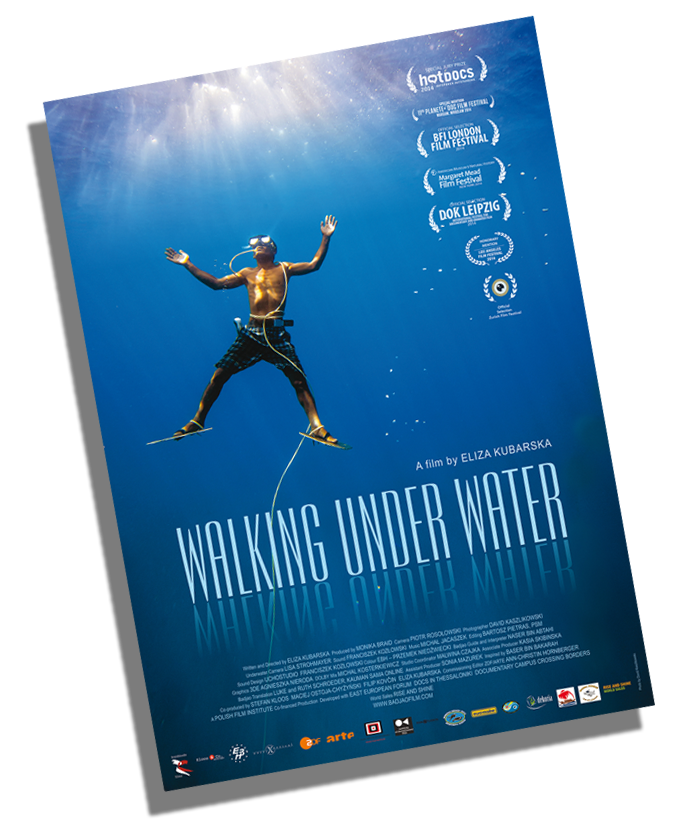 The Badjao people once lived freely, spending majority of their time on the water, but with the encroachment of modern civilization their way of life has become nearly extinct.

Alexan, last compressor diver from a small island near Borneo, teaches 10-year-old Sari everything he knows, from dangerous fishing techniques and wisdom about the underwater world to the temptations of the tourist economy. While Alexan refuses to accept that the world of his ancestors is gone, Sari is torn between his longing to be a fisherman like his uncle and the tug of the new world in the form of nearby resort.

Walking Under Water presents the Badjao tribe’s ancient lifestyle in a magical narrative, spinning the urgent problems they face into a hybrid of fantasy and fact.

You can watch film (in Poland) here: https://vimeo.com/ondemand/badjao

Borneo. Somewhere on the Sulu and Celebes seas there is a community of sea nomads with amazing skills. They live like a fish, spending most of their life on the water. They can walk and hunt on the sea-bed holding their breath for 5 minutes. Their eyes are adapted to focus underwater.  Living freely, they often have no ID’s, no citizenship and obviously no money. Some don’t even know how old they are…  Badjao are ancient masters of the sea pushed to the edge of extinction by the changing forces of the modern world.   While all families can live on their boats for long days, there is a time coming to visit harbour.  For some, it proves to be nerve-wrecking experience…

In the very same town diving industry thrives with thousands of Western tourists arriving to watch coral reefs and rich underwater fauna. In one day you can spot sharks, turtles and mantas. These are one of the best diving spots on the planet, so they say. Every season tourists spend thousands of dollars in luxury resorts – located on paradise islands, ancestral tribal lands of Badjao – but most of them never heard about sea nomads.

Two parallel, contrasting worlds: rich tourist industry and illiterate, neglected Badjao community. These worlds rub against each other, yet they rarely meet. Until…

We are available with lectures and multimedia show titled “Badjao. Last sea nomads”. About Badjao lifestyle and film “making of”. More photos at David’s gallery soon.

Manage Cookie Consent
To provide the best experiences, we use technologies like cookies to store and/or access device information. Consenting to these technologies will allow us to process data such as browsing behavior or unique IDs on this site. Not consenting or withdrawing consent, may adversely affect certain features and functions.
Manage options Manage services Manage vendors Read more about these purposes
View preferences
{title} {title} {title}